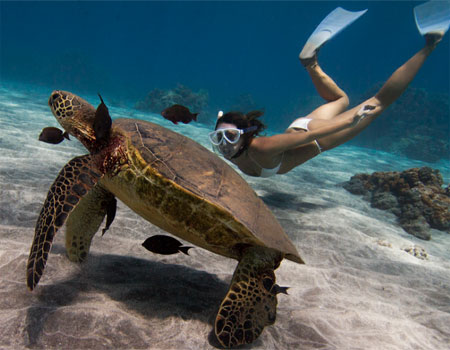 The Ten Best Places to Snorkel on Maui

One of the most famous and popular dive and snorkel sites in Hawaii is the Molokini Crater.  Located a few miles off the Southwest coast of Maui, between the islands of Maui and Kaho'olawe, Molokini is a partially submerged volcanic crater which forms a small crescent shaped island roughly a half a mile in diameter.  The crescent shape protects the crater from waves and currents allowing it to become an amazing dive spot with superb visibility.  Hundreds of species of fish call the reef at the floor of the crater their home as well as a wide variety of coral species.  The Molokini Crater is only accessible by boat and several companies offer daily snorkeling trips.

Swimming with the large green sea turtles is one of the most exciting things to do while visiting Maui.  The sea turtles can be massive in size and the adults can grow as large as five feet in length.  These turtles can also live as long as 80 years!  Although "Turtle Town" is a nickname given to several great snorkeling spots in Maui, most people who use that name are referring to Maluaka Beach which is south of Wailea in Makena near the Makena South golf course.  The beach has relatively calm water and a really nice coral reef off the south end of the beach which is perfect for snorkeling and has a abundance of marine life, including turtles!

Kamaole Beaches I, II and III

The three Kamaole Beaches in Kihei are some of the most popular beaches in South Maui for locals and tourists seeking some fun in the sun.  Located along South Kihei Road, the three Kamaole Beaches are easily accessible and have change rooms, showers and restrooms on site.  At the ends of each beach there are some rocky points that are perfect for snorkeling.  A wide variety of ocean life can be seen here in the clear shallow waters.  After snorkeling, these beaches are also the perfect place to enjoy a beautiful Maui sunset.

Located at the very Southwestern corner of Maui, La Perouse Bay is a really neat please.  Even the drive there down Makena Road to the very end is an experience as you go through Wailea and Makena and then through some amazing fields of lava rock.  Although the waters at La Perouse Bay are often windy, they feature some excellent snorkeling, particularly if you are lucky enough to find the waters calm.  The location is a popular spot for dolphins too and they are known to swim along with those who snorkel here!

Black Rock is the name of the large black lava rock that cuts Ka'anapali Beach in two.  The causal observer will know this spot from the cliff divers that are often seen jumping from this spot.  Once in the water, however, the snorkeling in this location is among the best in the world.  A massive array of coral is found surrounding this area and a tremendous assortment of fish, turtles and other sea creatures are regulars at Black Rock.  The location is also convenient to all of the hotels, shopping and restaurants of Ka'anapali which makes this spot all the better.

Around 10 miles south of Lahaina you will see several small rocky beaches just off of Highway 30 as it traces the coastline.  This is Olowalu and the coral reefs just offshore seem to go on forever.  The area is relatively shallow, even really far out from shore, and the water is clear, particularly later in the day or when the waves are small.  Although there are no facilities at the Olowalu beaches, there can be lots of great snorkeling.  Huge stingrays and turtles are also known to hang out in the area.

If you're up in the Napili area of Maui and want to check out a cool snorkeling spot, try Honolua Bay.  Honolua Bay is found just north of Napili and can be a terrific snorkeling spot if the weather cooperates.  Sometimes the visibility in Honolua Bay will be quite poor, particularly after a decent rain.  But when the waters are clear, the site features amazing coral reefs and an amazing array of fish and turtles too!  Large schools of very colorful tropical fish are common sights here.  Stick to the right side of the bay for the best snorkeling.

Right between Wailea and Makena near the Kea Lani hotel is a great little beach with really great snorkeling called Polo Beach.  The waters are a little more shallow than other beaches in the area, but there are still lots of great fish and marine life hanging out.  The reef is the best towards the north side of the beach where there are some really neat caves and arches underwater.  Since this beach isn't as protected as some of the others on this list, if the winds and surf pick up the waters will get murky fast.

If you want to snorkel at the Five Caves, only do so when the waters are calm as it can be extremely dangerous when the surf is big.  Beginners should probably try out some of the other locations in this list.  However, if you're an experienced snorkeler and want to see something different, Five Caves is pretty a pretty cool spot located just south of Wailea.  Of course you will see tons of fish here and turtles too hanging out in the many caves and crevices that can be found here, but you may also see some larger marine life, even reef sharks, chilling out in the caves.

The Ahihi Kinau Natural Area Reserve can be found just south of Makena.  In some of the locations featured on this list, you'll have to hunt down the prime locations for snorkeling.  But at Ahihi Kinau, you'll have great snorkeling just about anywhere you enter the water.  The area is very rocky with lava rock everywhere, in the water and out.  This makes for awesome snorkeling as the fish like to hide in the rocks and make them into their homes.  Snorkeling is great here at just about all times of the day, but it's best in the mornings before the winds start to pick up.